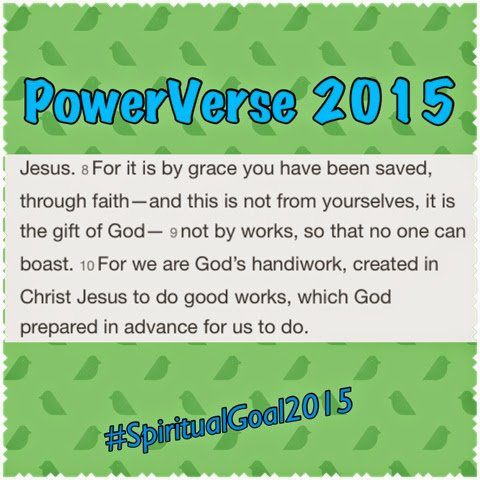 This year (2015) my ‘spiritual goal’ is to keep my relationship with God ‘uncomplicated’.
In the past, I always feel undeserving of God’s love and blessings. My belief is that I should ‘first’ do good things before God could love me and shower me with blessings. I used to believe that because of my many sins I am no longer entitled to seek Him just like a child seeks her father. But God talked me out of these wrong beliefs, maybe many times already, but I had only understood it last year.
My friend had a colleague who according to her is incompetent, lazy and a whiner but prays religiously, studies His Word, active in worships and have a strong faith. After some moths, her prayer (for new work) was answered by God. Regardless of her lack of knowledge and abilities and her past mistakes and negligence, God’s favor found her because God is gracious to those who have faith in Him. However, it does not mean that she should continue her negative attitude towards work, maybe, now that her petition is granted she’ll find new inspiration to do better.
For months, I analyzed (over-analyzed) her story. Imagine someone as lazy as she was (assuming, since I have a very reliable source) being heard by God. I felt envious and thought it was unfair. How could bad or lazy people get what they pray for while hard-workers and trying-to-be-good-all-the-time people (like me) do not get what they want. I got my answer to this: they rely to a gracious God while I rely on myself, my qualifications and my good deeds. I thought that if I work hard, try to be honest at all times, live by the rules, follow what is perceived as right and step on no one, I would get what I ask for. I was wrong. I should have surrendered and relied on God first and foremost.
I got an affirmation in this: (Luke 23:39-43) 39 One of the criminals who were hanged railed at him,<sup class="footnote" data-fn="#fen-ESV-25964a" data-link="[a]”>[a] saying, “Are you not the Christ? Save yourself and us!” 40 But the other rebuked him, saying, “Do you not fear God, since you are under the same sentence of condemnation? 41 And we indeed justly, for we are receiving the due reward of our deeds; but this man has done nothing wrong.” 42 And he said, “Jesus, remember me when you come into your kingdom.” 43 And he said to him, “Truly, I say to you, today you will be with me in Paradise.”
I realized that the repentant thief did not have the chance to say sorry to the people he have wronged. He was not able to give back what he stole. He was not able to correct his mistakes and redeem himself, yet He was forgiven and accepted by a gracious God, all because of his faith, albeit professed at the last minute. The thief broke the 8th commandment yet He was embraced by God with so much love after his repentance. Indeed, he was saved by God’s grace through faith.
So I’m shifting my spiritual perspective this year, from me to God alone. I’m changing my mindset by ingraining in my heart and mind that God loves me not only before I sin but also after, not only after I do good but also before. I’m simplifying my relationship with God by making it independent of my sins, kindness and circumstances. Meaning, if I sin, it does not mean I can no longer come up to Him. If I sin, the more I should seek for His mercy and guidance. If I did good, it does not also mean that I should no longer seek for His blessings, thinking it will be automatically given to me as a reward, because if it is, then I would only be relying on my good deeds instead of God’s grace. If the world is suffering, it does not mean I should also suffer to show my compassion for others and love for God. I could still live happily and comfortably while serving and following God for He has unique plans and missions for His children that’s why we have different life circumstances.
Maybe after this, I will have to take my relationship with God in the next step, in a deeper and wider level. Maybe. But for now, my goal is to keep it steady, constant and simple.